Prior to the burning process, coal crystals are ground to dust. The coal reaches the conveyor belt at a maximal size of 50 mm and is then ground to ultra-fine dust under 200 microns. The ground coal is transferred directly into the boiler using hot air. A vacuum effect in the boiler prevents leaks.

Coal burning in the boiler causes extremely high temperatures, between 1300-1700°c. The boiler walls are made of steel pipelines, in which the flowing water evaporates into steam as a result of the heat. The steam turns the turbine blades, which, in turn, activate the generator, creating electricity. The steam travels from the turbine to a condensing device, which turns the steam into water once again. The water is returned to the boiler – and the process is continuously repeated. 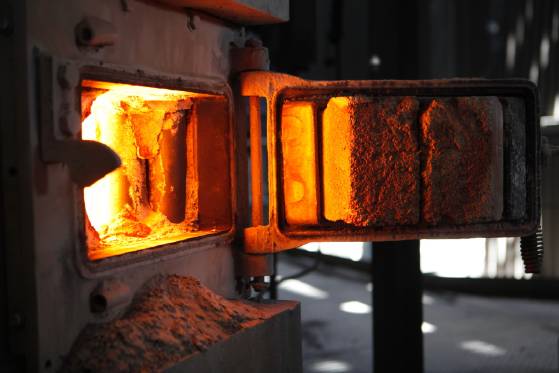 A single generator of 550 MWh creates 12,500 megawatts of electricity per day. For example, when one activates all the electrical devices in a residential home, these consume around 5 KWh. One generator creates around 12.5 M KWh per day.

The amount of coal loaded onto a ship is similar to the amount that can be loaded onto over 500 coal trucks (350-ton trucks).

In the coal burning process, Fly Ash and Bottom Ash are generated, and various gases are emitted during their transport from the boiler to the chimney, passing through electrostatic precipitators which capture most of the fly ash (the bottom ash sinks into a pool of water at the bottom of the boiler, and is transported outside).

Less than 1% of the fly ash particles are transported along with the emission gases through a sulfur scrubber, which contains a limestone solution. Thus, SOx is removed, and gypsum is created as a by-product. At this stage, the reduced-emissions gases and the steam generated by the chemical process inside the sulfur scrubbers are transported out through the chimney, which is located at a considerable height to ensure optimal dispersion.