Coal designated for electricity production arrives in Israel through large bulk carriers. It is transported to the ships directly from coal mines using trains or designated conveyors which deliver the coal directly into the ship holds.

In many places around the world, coal transport is performed through ground transportation as well, using trains and other means of transportation. However, due to Israel's geographical location, ground transport solutions are irrelevant. Israel imports coal solely by the use of marine transportation. For this purpose, Israel cooperates with mines featuring quick and convenient access to ports which are equipped with conveyors for transporting coal into ship holds. 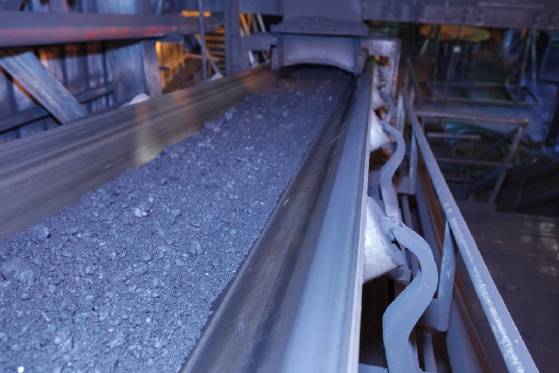 The largest ship ever to visit Israel is the SG Enterprise, carrying a freight of 211,485 tons.

The length of the voyage depends, obviously, on the distance from the origin port. A bulk carrier travels at a speed of 11-12 knots (around 20-22 kmph). The voyage from Russia to Israel lasts 19 days; from Columbia – 23 days, and from South Africa – 25 days via the Suez Tunnel, and 30 days using alternative routes. The duration of the voyage also depends on parameters such as weather, ship speed, technical issues, etc.

Arriving at the Port

The ship's entry at the port must be well-planned. With a giant ship weighing 20,000 tons, and carrying an additional coal freight of 160,000 tons, a distance of approximately 0.5 km must be considered for the ship's halt. Each bulk carrier is manned by 20-24 crew members, responsible for planning a safe departure route for the ship into the open sea and a safe entry into the port. 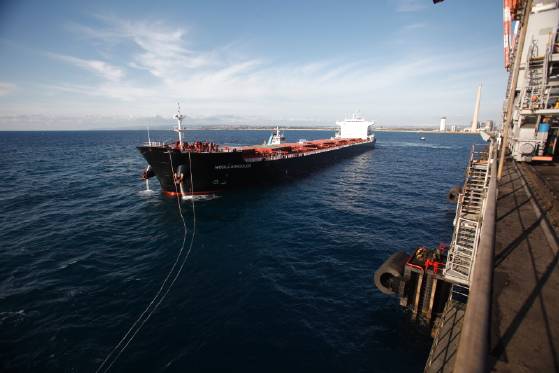 Coal ships are unloaded in ports equipped with a designated conveyer for coal transport. The ship unloading is performed by giant cranes comprising Grabs, each with a capacity of 22 tons. Two or three cranes work simultaneously to unload the coal from the giant holds in the belly of the ship. The coal is transported from the Grabs into a giant funnel deployed just above the coal conveyer, and the conveyer transports the coal directly to the designated zone in the Israeli Electric Corporation.

During the coal unloading process, the bulk carrier experiences intense pressure, as a result of changes in weight of the coal freight, as the holds are gradually emptied of their cargo. The role of the crew is to ensure that the unloading is performed in a balanced manner between the holds, so that the ship stays balanced and protected from the danger of cracking or drowning.

The End of the Journey

The last part of the coal's journey is takes place in an additional conveyer leading the coal directly into steam tanks which create the required energy for electricity production.